Eastern and Western healing philosophies are considered equal in Asha Vihar and are used as such. They do not compete with, but complement each other. In the meantime, a spectrum has shown which medicine is more effective in which disease and thus has priority.

OUR WORK IN THE CLINIC 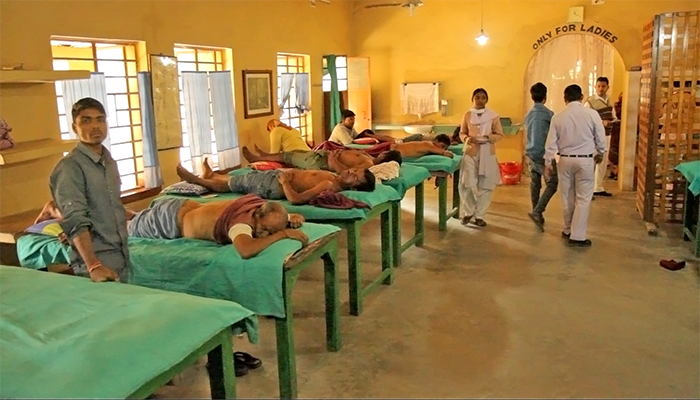 Both outpatients and inpatients are assigned priority according to these criteria to the appropriate departments, e.g. the skin diseases to homeopathy, the functional disorders to TCM, the infectious diseases and deformities to conventional medicine.

We employ 11 acupuncturists, 1 homeopath, 1 ayurveda, 1 allopath and 3 physiotherapists. They treat 100 to 150 patients on an outpatient basis, 40 to 50 inpatients and 70 to 80 patients in the satellite stations.

In addition to the technical aspects (effectiveness), the entire medicine also depends on other, non-medical aspects, such as acceptance and trust, mentality, and religiosity on the part of the population, as well as costs, proportionality, availability of diagnostics and therapy.

The entire medical project Asha Vihar has about 60 employees (from acupuncturist to cook) and monthly personnel costs of 6,630 $. All our employees are pension and health insured!

Many of our employees were trained in Asha Vihar and received their certificates in major cities such as Calcutta. Our acupuncture training is recognized by the WHO.

The clinic is located on a 3-hectare site with many green areas, several dining areas, living areas, sanitary facilities, and washing and shower rooms for the patients. In addition, there is a playground with a double function. It is used not only by the children of the patients, but also by the patients themselves: in between their treatments, they use the equipment as a physiotherapy practice to train coordination, balance, strength and flexibility.

Asha Vihar has 80 beds for inpatient treatment. According to official data, Asha Vihar is the largest acupuncture clinic in India. 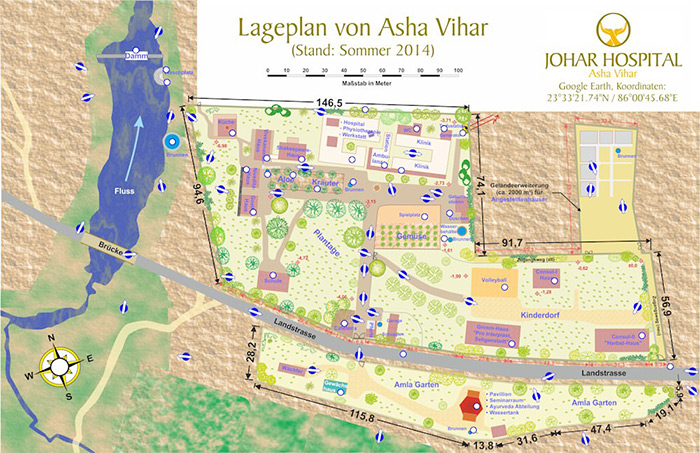 With a click on the map you can move around the site interactively and take your time to look around. (A window with a map of Asha Vihar will open.) If you move the mouse over the map, the pointer will change where the map is illustrated by images. Clicking with the left mouse button will take a picture of the respective place shown.).